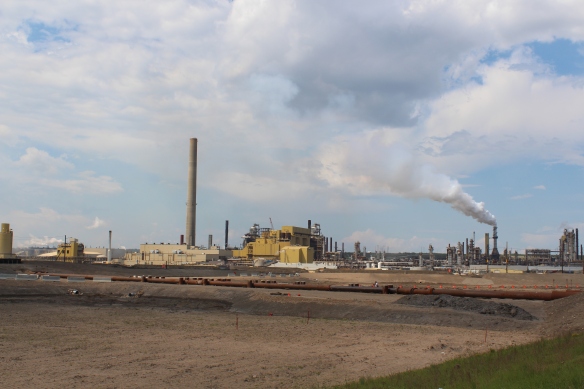 Environment Canada estimates carbon pollution from the oilsands increased 307 per cent between 1990 and 2012. It also estimates a further 61 per cent increase in emissions by 2020.

You may have seen this report in the Toronto Star about a mysterious end to a secretive group that was created to draft new rules to reduce carbon pollution from oil and gas companies.

Environment Minister Leona Aglukkaq was asked about the long-delayed rules for oil companies on Tuesday in the House of Commons by NDP environment critic Megan Leslie.

END_OF_DOCUMENT_TOKEN_TO_BE_REPLACED

OTTAWA – Senior federal and Alberta government officials are working hand-in-hand with a task force of oil and gas CEOs to “turn up the volume” on communications tactics to fight criticism about the industry’s environmental record, newly released federal documents have revealed.

The briefing notes from Natural Resources Canada, obtained by Postmedia News, highlight the role of the committee that sought input from a former senior adviser to Prime Minister Stephen Harper for a strategy designed at “upping their game” against criticism from other countries, as well as from Canadians in Ontario and Quebec.

END_OF_DOCUMENT_TOKEN_TO_BE_REPLACED

The documents were released as international negotiators from almost 200 countries gather in Cancun, Mexico, for the annual United Nations climate change summit. They also coincide with an acknowledgment from Environment Minister John Baird last weekend that Canada would not follow the lead of the Obama administration in its plans to set new limits on greenhouse gas pollution from new industrial facilities and major expansions to existing ones starting in the year 2011.

END_OF_DOCUMENT_TOKEN_TO_BE_REPLACED

OTTAWA – Canadian diplomats in Washington have quietly asked oil industry players such as Exxon Mobil and BP to help “kill” U.S. global warming policies in order to ensure that “the oil keeps a-flowing” from Alberta into the U.S. marketplace, Postmedia News has learned.

In a series of newly-released emails from Canada’s Washington embassy, the Canadian diplomats described recommendations from Environment Canada to clean up the oilsands as “simply nutty,” proposing instead to “kill any interpretation” of U.S. energy legislation that would apply to the industry.

“We hope that we can find a solution to ensure that the oil keeps a-flowing,” wrote Jason Tolland, from the Canadian Embassy in an exchange of emails with government trade lawyers on Feb. 8, 2008.

END_OF_DOCUMENT_TOKEN_TO_BE_REPLACED

The documents, obtained by Postmedia News, suggest that Environment Canada, Natural Resources Canada as well as the Department of Foreign Affairs and International Trade, have collaborated on an “advocacy strategy” in the U.S. to promote the oilsands and discourage environmental-protection policies.