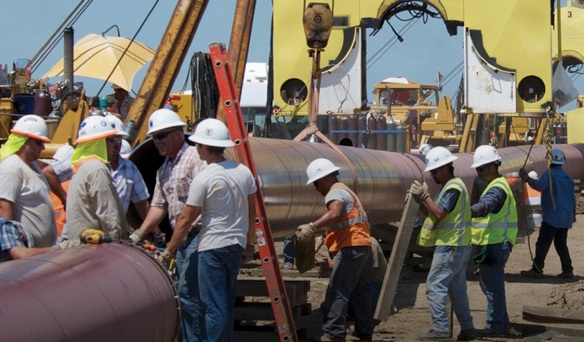 Both the Finance and Natural Resources Departments said Friday that they developed the two ad campaigns “in consultation” with Joe Oliver’s office and the Privy Council Office.

One campaign, which concluded in April, promoted the Canadian oil industry in the United States. A separate ad campaign is now telling Canadians that the government is helping families.

The Privy Council Office is the central department in the federal government, serving the prime minister and his cabinet.

The Canadian government gave Natural Resources Canada a budget of more than $30 million in 2013 to spend over two years on international advertising, lobbying and research mainly to promote the oilsands industry and counter criticism from environmental groups that say the Canadian companies produce “dirty oil.”

Natural Resources Minister Greg Rickford was told in briefing notes, marked “secret” but declassified for release through access to information legislation, that his predecessor was asked to personally approve the advertising and lobbying spending, including the ads that ran in Washington to promote Alberta-based energy company TransCanada’s Keystone XL pipeline proposal.

“The minister is responsible for approving advertising and outreach expenditures,” said the briefing note prepared by Natural Resources Canada as part of the transition binder for Rickford, who took over the portfolio in March 2014.

Rickford replaced Oliver, who moved from Natural Resources Canada to the Finance Department.

“We are working closely with your office, the Department of Foreign Affairs, Trade and Development, and central agencies to ensure key decisions on advertising and outreach are aligned with strategic priorities,” said Natural Resources Canada in the briefing.

It also said that some of the lobbying money was meant to be used to “advance energy literacy among BC First Nations communities.”

In terms of money spent abroad, in the U.S., Europe and Asia, Rickford was told the money was meant to “brand Canada as a responsible and secure energy supplier.”

The department has also had a $25.5 million budget for advertising in Canada since 2012, the document said.

Overall, for 2013-2014, the federal government spent at least $61 million on advertising, according to public spending records. This total includes most major spending by departments, but not all government-funded advertising spending from other federal organizations.

Here’s a list of the biggest advertising spenders in government for 2013-2014 based on the financial records tabled in Parliament:

View this document on Scribd