Participants in a June 2014 “healing walk” around oilsands facilities, close to Fort McMurray, Alberta, stop near a pond filled with toxic tailings waste.

Who are Health Canada’s experts assessing human health impacts of oilsands development? And why has the federal government never done a comprehensive study of health impacts in the region after more than half a century of industrial development?

These are among the questions I asked Health Canada in early July as part of my research for this oilsands story published this week.

END_OF_DOCUMENT_TOKEN_TO_BE_REPLACED 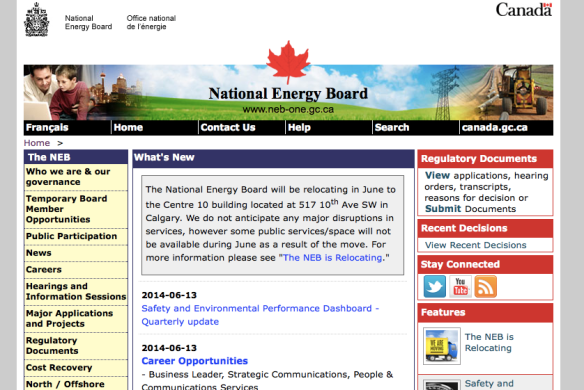 The NEB is spending about $21 million over two years on its office move.

Canada’s national energy regulator estimates it will spend about $21 million over two years – more than new funding announced to improve its existing oversight of pipeline companies – to move into its new Calgary offices.

The total moving costs add up to $20.7 million, say National Energy Board records tabled in Parliament. Those include about $12.4 million in 2013-2014 and about $8.3 million in 2014-2015 to relocate within Calgary into a building on a site that was previously affected by a large sinkhole.

END_OF_DOCUMENT_TOKEN_TO_BE_REPLACED

OTTAWA – Natural Resources Canada says a powerful oil and gas industry lobby group was responsible for organizing a key meeting and some controversial messaging, in partnership with government, to polish the image of Alberta’s oilsands industry.

In newly released emails and internal records, department officials said the strategy to “turn up the volume” and get “the right attitude” on oilsands advocacy was actually proposed by high-ranking officials from the Canadian Association of Petroleum Producers during a March 2010 meeting involving senior federal and Alberta government officials, as well CEOs from oil and gas companies.

“The meeting was organized by the Canadian Association of Petroleum Producers (CAPP),” wrote Natural Resources Canada media relations manager Paul Duchesne in an email sent on March 15, 2011, that was supposed to be delivered to Postmedia News. “We suggest you contact CAPP for more information.”

END_OF_DOCUMENT_TOKEN_TO_BE_REPLACED

The documents were released as international negotiators from almost 200 countries gather in Cancun, Mexico, for the annual United Nations climate change summit. They also coincide with an acknowledgment from Environment Minister John Baird last weekend that Canada would not follow the lead of the Obama administration in its plans to set new limits on greenhouse gas pollution from new industrial facilities and major expansions to existing ones starting in the year 2011.

END_OF_DOCUMENT_TOKEN_TO_BE_REPLACED

OTTAWA – Canadian diplomats in Washington have quietly asked oil industry players such as Exxon Mobil and BP to help “kill” U.S. global warming policies in order to ensure that “the oil keeps a-flowing” from Alberta into the U.S. marketplace, Postmedia News has learned.

In a series of newly-released emails from Canada’s Washington embassy, the Canadian diplomats described recommendations from Environment Canada to clean up the oilsands as “simply nutty,” proposing instead to “kill any interpretation” of U.S. energy legislation that would apply to the industry.

“We hope that we can find a solution to ensure that the oil keeps a-flowing,” wrote Jason Tolland, from the Canadian Embassy in an exchange of emails with government trade lawyers on Feb. 8, 2008.

END_OF_DOCUMENT_TOKEN_TO_BE_REPLACED

The documents, obtained by Postmedia News, suggest that Environment Canada, Natural Resources Canada as well as the Department of Foreign Affairs and International Trade, have collaborated on an “advocacy strategy” in the U.S. to promote the oilsands and discourage environmental-protection policies.