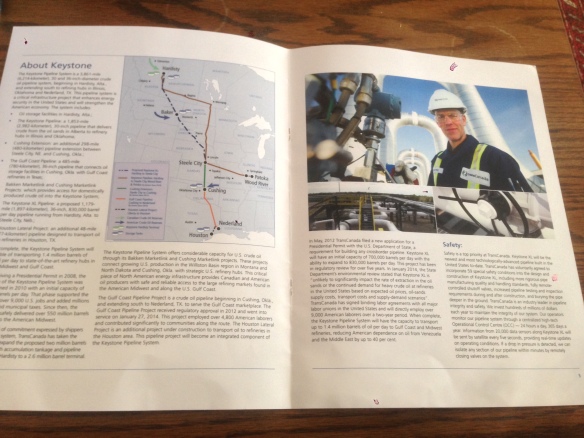 This brochure promoting TransCanada’s proposed Keystone XL pipeline was distributed at a recent ALEC conference. TransCanada said it’s not a member of ALEC but that it sponsored an “ice cream social” event at the meeting. Photo courtesy of Nick Surgey, Center for Media and Democracy.

Exxon Mobil says there is “no story” for reporters to tell about its funding for the American Legislative Exchange Council – a non-profit organization that connects lobbyists with American state legislators on secretive committees that draft model laws in a wide range of public policy issues.

Exxon Mobil also requested to speak to an editor from the Toronto Star to explain why there was “no story.”

The company said that it doesn’t deny climate change.

A new story about ALEC was published by the Toronto Star on Saturday and you can find it here.

END_OF_DOCUMENT_TOKEN_TO_BE_REPLACED 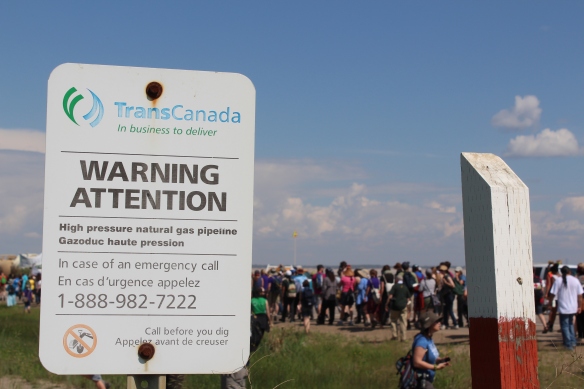 I’ve just concluded a six-week stint at the Ottawa bureau of the Toronto Star.

Here are some of the stories we published over the course of this contract:

END_OF_DOCUMENT_TOKEN_TO_BE_REPLACED

While one American-based climate change skeptic walked away with a $541 soapstone carving, Talisman Energy and other donors to “research” funds at the University of Calgary received tax receipts as a result of a public relations campaign to cast doubt on global warming science, newly released records have revealed.

The revelations from hundreds of pages of invoices and accounting documents from an internal audit come as the university and Talisman, an Alberta-based energy company, move to distance themselves from the sophisticated international marketing and lobbying effort to discredit scientific evidence linking human activity to climate change.

END_OF_DOCUMENT_TOKEN_TO_BE_REPLACED

OTTAWA – A pair of “research” accounts at the University of Calgary, funded mainly by the oil and gas industry, were used for a sophisticated international political campaign that involved high-priced consultants, lobbying, wining, dining, and travel with the goal of casting doubt on climate change science, newly-released accounting records have revealed.

The records showed that the strategy was crafted by professional firms, in collaboration with well-known climate change skeptics in Canada and abroad, allowing donors to earn tax receipts by channeling their money through the university.

END_OF_DOCUMENT_TOKEN_TO_BE_REPLACED

OTTAWA – Some of Prime Minister Stephen Harper’s newly-appointed senators are emerging as global-warming skeptics in the wake of aggressive government positions to abandon the Kyoto Protocol, slam environmentalists and downplay potential damage caused by Canadian oil and gas exploration.

“I felt like it is kind of an insult to be a denier for a long time,” said Sen. Bert Brown, last month at a parliamentary committee studying energy policies. “It feels pretty good this morning.”

Brown made the comments as the committee heard from four well-known academics who don’t believe humans are playing a major role in warming the planet. The session took place three days after Harper’s government confirmed it would withdraw from the Kyoto Protocol, the world’s only legally-binding agreement that requires countries to reduce greenhouse gas emissions.