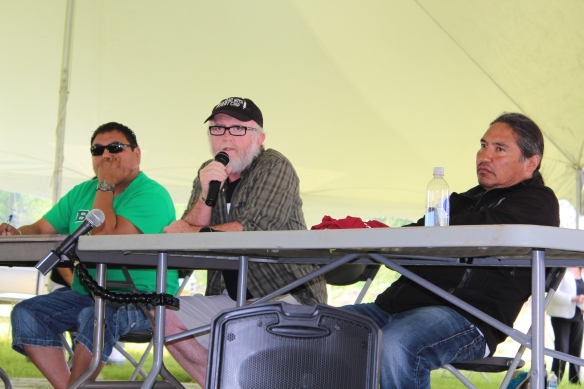 First Nations communities have alleged that toxic pollution from oilsands operators is contaminating their air, water and food. Representatives from industry and the federal and provincial governments have pointed to research suggesting the toxins aren’t yet at unsafe levels.

But the anticipated study described by Chief Adam would follow a provincial government report, released in March by Alberta’s chief medical officer, James Talbot. The provincial report confirmed warnings about high rates of a rare form of cancer from a local physician, Dr. John O’Connor, who had been criticized for publicly drawing attention to the cases in the community of Fort Chipewyan.

The provincial government confirmed levels of bile duct, cervical and lung cancer in the community, between 1992 and 2011, that were several times higher than expected. But the report also found that the overall number of cancer cases was 81, and therefore not significantly higher than the expected total of 79 cases.

Bile duct cancer can be linked to a number of factors such as family history or exposure to some toxins.

Talbot said in March that there wasn’t “strong evidence for an association between any of these cancers and environmental exposure.”

Talbot also confirmed at the time that there were never any comprehensive studies in the potentially affected communities.

O’Connor said that nurses and doctors in the community may see things differently.

“The proof is up there if anyone chooses to look,” O’Connor said in an interview after participating in a panel discussion with Adam and George Poitras, the CEO and a former chief of the Mikisew Cree indigenous First Nation.

Several hundred people from Canada and the United States travelled to northern Alberta for the outdoor weekend retreat – described as a “Healing Walk” around oilsands operations for First Nations communities affected by the industrial development.

This is the fifth and final edition of the walk, a 20 km trek scheduled on Saturday. The event’s website said organizers would shift their focus in subsequent years away from open-pit oilsands mining to raising awareness about impacts of other forms of oilsands extraction that use steam injected deep underground.

Chief Adam said in an interview that the University of Manitoba study would likely be released within a month with findings that would raise questions about the credibility of the Alberta Health report on cancer in Fort Chipewyan.

The provincial report prompted newspaper articles in the Globe and Mail and the National Post, among other media reports, that defended the oilsands industry – an economic engine in Canada that historically relied on generous government incentives and subsidies, but which also generates jobs and billions of dollars in tax revenues – suggesting that the Alberta government review proved that O’Connor’s warnings were “falling apart.”

“They have to sleep at night and they have to answer their grandchildren. Why did you do this? And all you’ve got to do is look in the communities and you know there’s no doubt about what’s going on.” – Dr. John O’Connor

“My way of reconciling it and dealing with it, is if they (media personalities) think I’m doing wrong, I know I’m right, because if they agreed with me, I’d want to take a long hot shower and really examine what I’m doing.”

O’Connor said this is why he has no regrets. But he wonders whether government officials feel the same way.

“I have a clear conscience,” he said. “I wouldn’t hesitate to do it again and will do it again if a similar situation arises. I would hate to be in their position. They have to sleep at night and they have to answer their grandchildren: Why did you do this? And all you’ve got to do is look in the communities and you know there’s no doubt about what’s going on.”