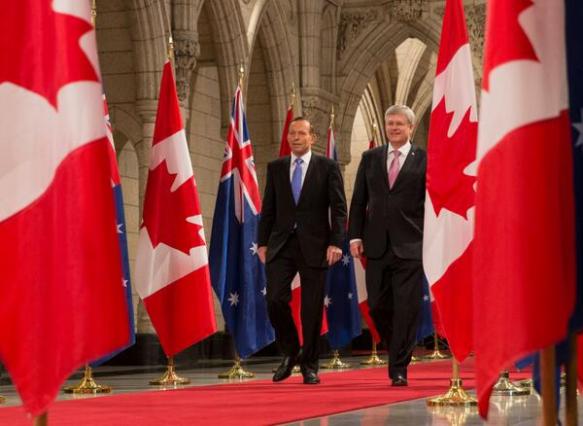 Abbott, who is visiting North America, and Harper, both said their respective governments weren’t trying to avoid dealing with the problem, but suggested they were trying to avoid damaging the economy.

The comments were immediately challenged by one of the Harper government’s former political advisers, David McLaughlin, who headed a panel that warned Canada would pay an economic price by not taking action to address climate change.

McLaughlin wrote on his Twitter account that the message from Harper and Abbott was reinforcing a “meme” that dealing with the environment, comes at the expense of the economy.

@mikedesouza Economic impacts on Canada from NOT arresting climate change. Other side of coin we heard today in Ottawa. #cdnpoli

McLaughlin, a former chief of staff to the finance minister, is now a strategic advisor on sustainability at Waterloo University’s Faculty of Environment.

Harper’s government abolished the panel headed by McLaughlin, the National Round Table on the Environment and the Economy, in its 2012 budget, stating that it no longer needed its advice since it believed it could find the expertise elsewhere. The cut was projected to generate savings of about $5 million per year.

The government later deleted the panel’s website, but moved its reports and research over to a website hosted by Library and Archives Canada.

Coal plants are one of the most challenging and significant sources of carbon pollution in the U.S. economy.

Harper’s government hasn’t yet taken action to address carbon emissions from the oil and gas industry, including in the oilsands which are the fastest growing source of heat-trapping greenhouse gases in the country.

Here’s a transcript of the comments by Abbott and Harper at a joint news conference in Ottawa in response to a question from an Australian reporter who asked whether Obama’s recent announcement to crack down on carbon pollution from coal plants was putting pressure on their own governments to do more to fight climate change.

“I am encouraged that President Obama is taking what I would regard as direct action measures to reduce emissions. This is very similar to the actions that my government proposes to take in Australia. We should do what we reasonably can to limit emissions and avoid climate change – man-made climate change. But we shouldn’t clobber the economy and that’s why I’ve always been against a carbon tax or an emissions trading scheme because it harms our economy, without necessarily helping the environment.”

“Look, I don’t feel any additional pressure other than the pressure we all feel to make progress on this important issue. I think it’s important to lay out the facts here and certainly our officials can give you more of the facts. The measures outlined by President Obama, as important as they are, do not go nearly as far, in the electricity sector, as the actions Canada has already taken, ahead of the United States, in that particular sector. Now that particular sector is obviously, and the effects of climate change regulations in that particular sector in the United States are obviously more sensitive to the overall American economy than they are in Canada. The reason I mention these things is just to make the point that, as I think Tony has also made, that it’s not that we don’t seek to deal with climate change. But we seek to deal with it in a way that will protect and enhance our ability to create jobs and growth, not destroy jobs and growth in our countries. and frankly, every single country in the world: This is their position.”